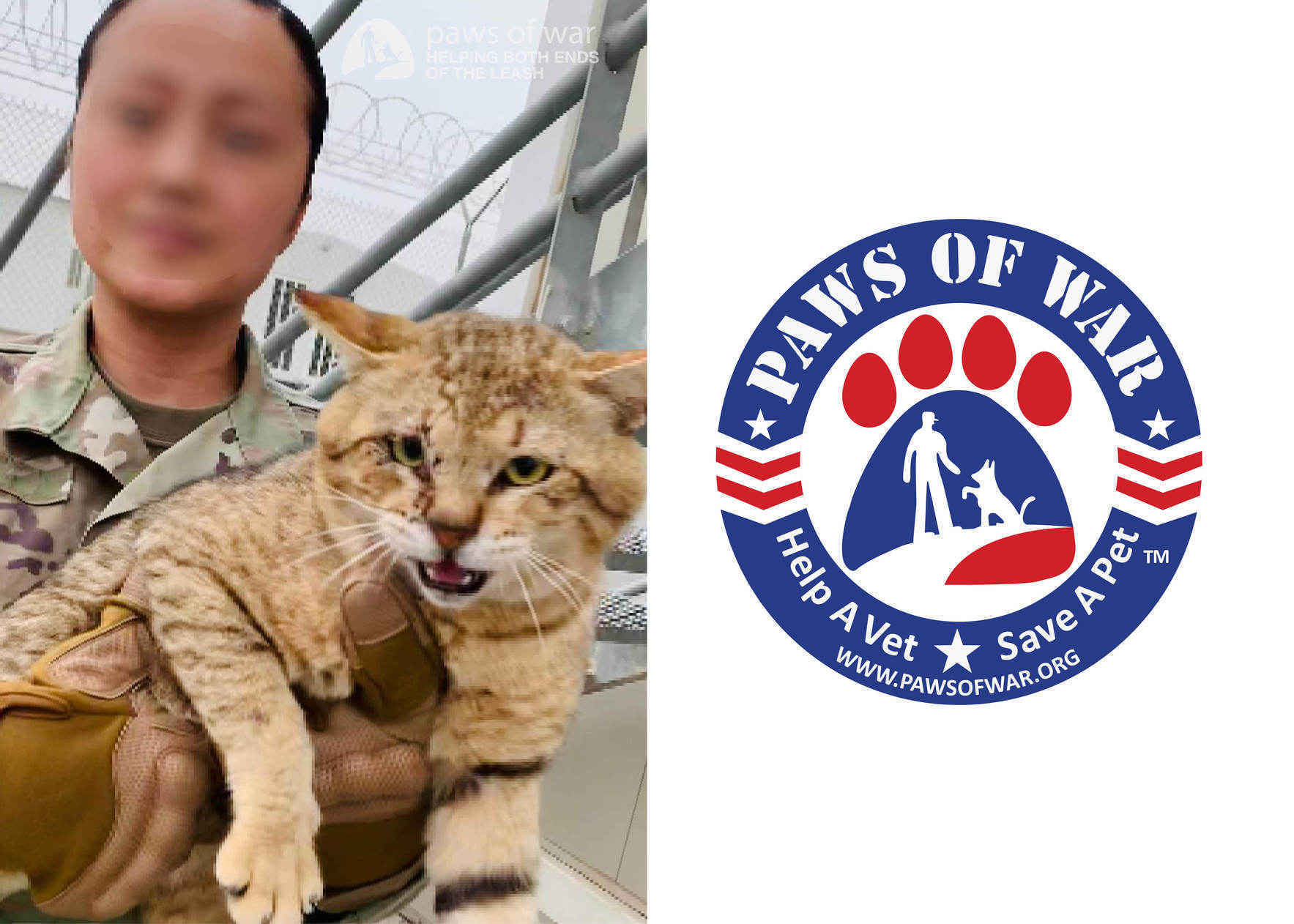 THANK YOU TO EVERYONE WHO DONATED

With an outpouring of support Bubba's Rescue Mission Has Been Funded

Army Sergeant Rode is so grateful to everyone who made her dream of saving the cat she loves so much Bubba, come true. Your support saves soldiers from having to suffer the trauma of leaving their beloved rescued pet behind. To continue to support our War Torn Pups & Cats mission, please visit us here.

Soldier Becomes Angel to Injured and Abused Cat, Wants Him to be Her Companion

Thank you for your support of Paws of War and our War Torn Cats program. Your donation will go to helping with the expenses of Bubba's rescue, and our ongoing rescue efforts for soldiers serving overseas and their beloved rescued animals.

While she didn’t set out to be, Army Sergeant Rode became an angel to a cat while serving in the Middle East She’s on a mission to help Paws of War with the costs of rescuing her cat, which she named Bubba, back to the states with her since she has received new orders. It’s a mission that Paws of War can help her pull off, but only with the support of the community. This type of effort takes a village, and the organization is asking people to support Sgt. Rode, who is serving her country.

“This is a story you can’t help but to love and want to get behind,” explains Dereck Cartright, a disabled veteran who is the stateside logistics coordinator at Paws of War. “Sgt. Rode saved Bubba, but there’s only so much she can do on her own”

When Sgt. Rode first saw Bubba, he had given up. Bloody, frail, and injured, the cat ran from everyone. It was clear that he had been fighting for his life for a long time. Sgt. Rode knew she had to help. For days, she left food, waiting nearby to make sure he ate. Initially, he cried and backed away when he saw her, but eventually, he grew to trust her and allowed her to sit within just a few feet while he frantically ate the food she left.

Slowly but surely, Bubba allowed her to get a little closer until, finally, Sgt. Rode was able to touch him. However, what she discovered horrified her. Old scars mixed in with new wounds that covered Bubba's body. He had been through a lot and was timid, but once he felt the kind touch of Sgt. Rode, he immediately began purring, showing her the love and affection he had never been shown. She became Bubba's angel, and he became her greatest joy while serving overseas, and they were essentially inseparable.

Worry came back to her when she received new orders to head home, and it was clear that she would not be able to take Bubba with her. She couldn’t stand the thought of leaving him behind to fend for himself or to try to find someone else to provide him with the love and care that he has grown accustomed to with her. When she heard about the work that Paws of War does, helping soldiers to get their pets back to the U.S., and she turned to it for assistance.

“Bubba is such a wonderful cat, and he greets me every time he sees me and purrs loudly whenever I pet him,” says Sgt. Rode. “I have formed such a great bond with him, it took me so long to gain his trust, and I can’t fathom the thought of leaving him behind once I get deployed back to the U.S. He has been a wonderful companion and provides me so much comfort when I need it most. I could not leave this cat behind to suffer and die. He trusts me, and I won’t let him down.”

Paws of War is seeking the support of the community to cover the costs in order to bring Bubba back to the states to live out his life with Sgt. Rode. While the organization has helped many soldiers bring their rescued animals back, it’s a mission that is costly. Soldiers tend to rescue stray dogs and cats, and they form bonds with them that help them to find comfort during their time of deployment. With the help of donations from the community, they are able to cover the expenses that are involved in such a mission.

The organization has helped so many soldiers with this type of mission that it has created a strong network of support. It’s that network that helps them to navigate through the challenges and logistics of relocating a pet overseas, and to pay for the care, paperwork, and flight that is involved in the mission.

In addition to helping soldiers relocate their pets, Paws of War also rescues dogs, provides them with proper training, and then pairs them with veterans who need service animals, all free of charge. It also helps soldiers bring dogs and cats they rescued while serving overseas to safety in the U.S. Those who would like to learn more about supporting Paws of War and its mission can go online to: http://pawsofwar.org.