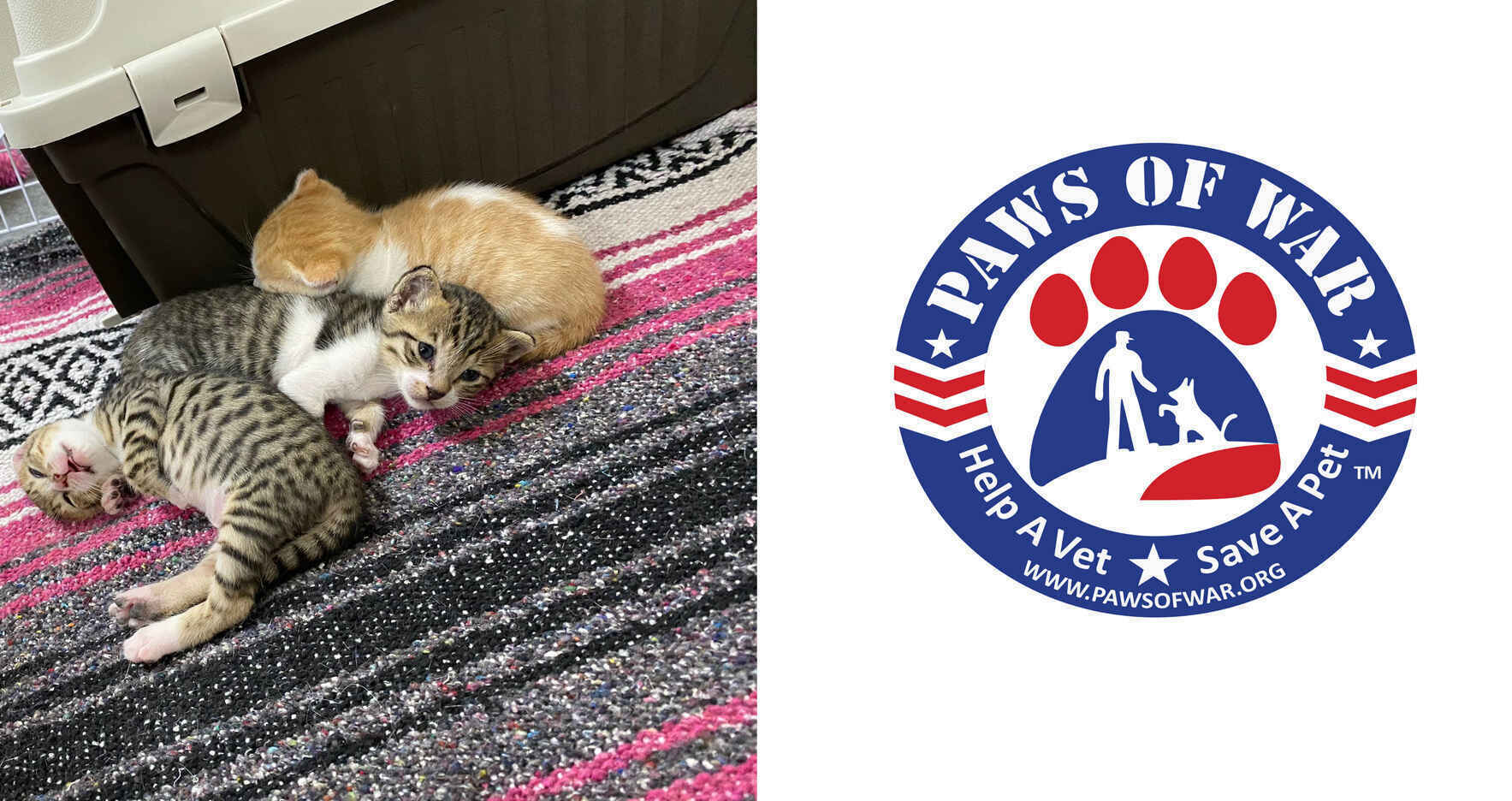 May is both National Military Appreciation Month and National Pet Month, making it a great time to help Army Sergeant Hetty with her mission, and the War Torn Cats program. Stationed overseas, she has rescued a cat, called Nubbs, who had kittens. Now she’s received her orders to head back to the U.S., but she can’t bear the thought of leaving Nubbs and her babies behind. She has teamed up with Paws of War to try and bring them all back to her home in the U.S.

“We are happy to help Sgt. Hetty, but we can’t do it alone,” explains Dereck Cartright, a disabled veteran who is the stateside logistics coordinator at Paws of War. “Our efforts are only successful at these missions if the community supports it. When they make even a small donation, it all adds up so that we have the funds needed to make this happen.”

Nubbs was a stray cat who roamed around the military base. One day, the soldiers saw her listless body caught on barbwire, and thought she was dead. They rushed over to help her and saw she was just stuck and in bad shape, so they nursed her back to health. It didn’t take long before they noticed she was gaining weight, and they realized she was pregnant.

The cat continued to hang around the soldiers, building a relationship with them. While she liked them all, her favorite person was Sgt. Hetty, whom she gave more affection to and trusted the most. She gave birth to four kittens, but only three survived, even though the soldiers tried to help as much as they could by taking turns nursing the kittens. They even reached out to local animal organizations for veterinary care, but they didn’t provide any assistance.

Sgt. Hetty, Nubbs, and the kittens created a strong bond, which made her anxious when she got her deployment orders that showed she would be heading back to the U.S. Knowing the area she is deployed in is not hospitable for cats, she can’t abandon Nubbs and the kittens there, because they won’t be taken care of. Her desperate wish is to relocate the family back to her home, where Nubbs and her babies can live out their lives in safety and comfort.

“I love Nubbs, so there’s no way I can just walk away from her and leave her and the babies to fend for themselves,” explains Sgt. Hetty. “I asked around and was told that Paws of War helps soldiers with rescues like this. I’m hoping that they can help me to get Nubbs and her babies back to my home. It would mean so much to me to be able to save them, and not leave them to die”

Nubbs is a calico cat, which is considered to be good luck. Her babies have been named Biggie Paws, Dhabi, and Patti. Paws of War needs the help of the community in order to make this rescue happen.

Paws of War has a great reputation and helps service members from every branch of the military bring animals they rescue while serving overseas to safety in the U.S. These rescued animals become life changing companions that play an import role in the service members return from deployment.

It’s a mission that is costly and takes jumping through numerous hoops, but Paws of War has done it enough times that it is able to navigate the procedure and successfully relocate the pet. The organization has a strong network of support that helps it to navigate through the challenges and logistics of relocating a pet overseas, and to pay for the care, paperwork, and flight that is involved in the mission.

Paws of War runs several core programs serving veterans and first responders. The War Tor Pups program helps soldiers who have rescued a dog or cat overseas, bring them to safety where they are companion animals for the soldier. Paws of War also provides service dog training, free veterinary care, a companion animal adoption program for veterans and first responders, and an outreach program for homebound disabled veterans. Those who would like to learn more about supporting Paws of War and its mission can go online to: http://pawsofwar.org.