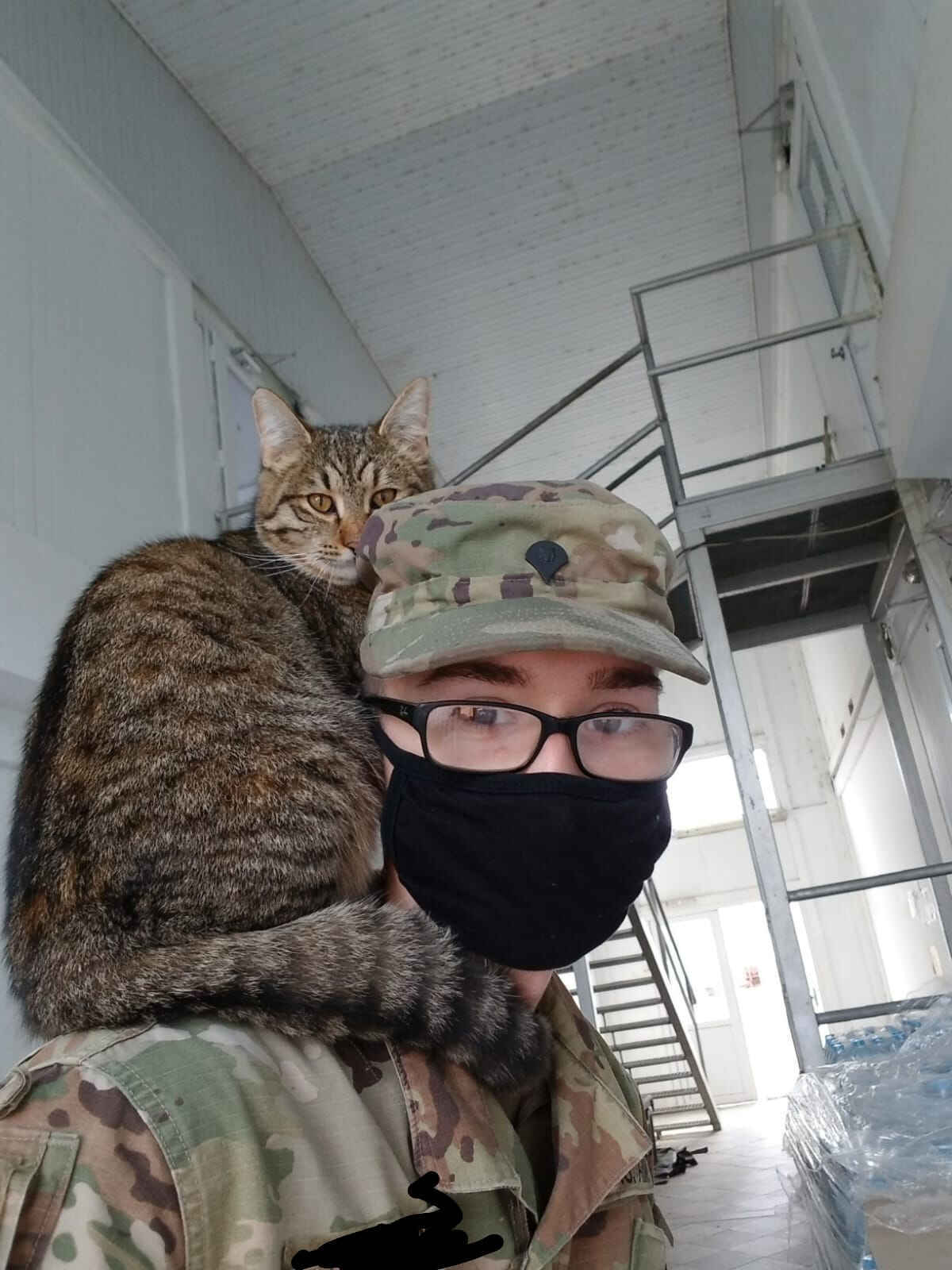 US Army Soldier Saves Cat, Seeks Help Bringing Her Home Before the Holidays

When U.S. Army Specialist Kaiden arrived on duty overseas, he saw a cat that would hang around the area. The cat would watch everyone from atop the pallets but run away afraid if anyone approached her. That was until the day that SPC Kaiden decided to take a seat on the pallets and see how the cat, which they named Tiger, would react. From that moment on, they formed a bond that can only be broken by being nearly 7,000 miles apart.

“SPC Kaiden has a strong bond with Tiger, and now he needs her to safely be sent back to her home in America,” explains Dereck Cartright, a disabled veteran who is the stateside logistics coordinator at Paws of War. “We want to do everything we can to help make this happen, but we need the assistance of the public to successfully pull off the mission.”

Tiger took to sitting on SPC Kaiden’s shoulders and always running up to him when he was around. She even became friendlier with the others, losing her fear as time went on. She was fed and well taken care of, and provided SPC Kaiden with companionship and something to look forward to each day.

Tiger, a tiger-striped tabby cat, began to eat more and grow heavier. It wasn’t long before they realized she was going to have babies. She gave birth to three kittens and was protective of them. Once they were old enough to leave their mother, the three were adopted out. That leaves Tiger to fend for herself if she’s not sent back to the States, where she can live out her life in her forever home with SPC Kaiden and his family.

Wanting to bring your pet back home with you after deployment and actually having it done are two different things. There are challenges and hurdles that must be cleared in order to successfully pull it off. SPC Kaiden had heard of Paws of War helping other people in the service to get their pets relocated after deployment, so he reached out to see if it could help him, too.

“Tiger and I have become inseparable, and I can’t imagine leaving her behind when I live thousands of miles away,” explained SPC Kaiden. “I’m grateful that there is an organization like Paws of War that cares enough to help us with this type of situation. I’m also thankful there are people in the community who support what they do, so that they can carry out their mission.”

Paws of War is working to relocate Tiger back to America for SPC Kaiden, and it is seeking community support to help make it happen. In addition to the financial costs that it will incur, which includes airfare, veterinary care, and other logistics that can be costly, there are government hurdles.

Many service members stationed around the world rescue cats and dogs and become attached to them. The pets bring them peace and comfort, and put smiles on their faces. Paws of War has made it its mission to help get those pets relocated back to America when the time arrives. It has helped many people to get their pets relocated following deployment.

There are rules and red tape that must be followed in order to successfully relocate Tiger, including medical expenses to ensure the pet is healthy, and the transportation expenses. The donations Paws of War receives from those in the community, no matter how small they may seem, all add up to help pull off successful missions for the soldiers.