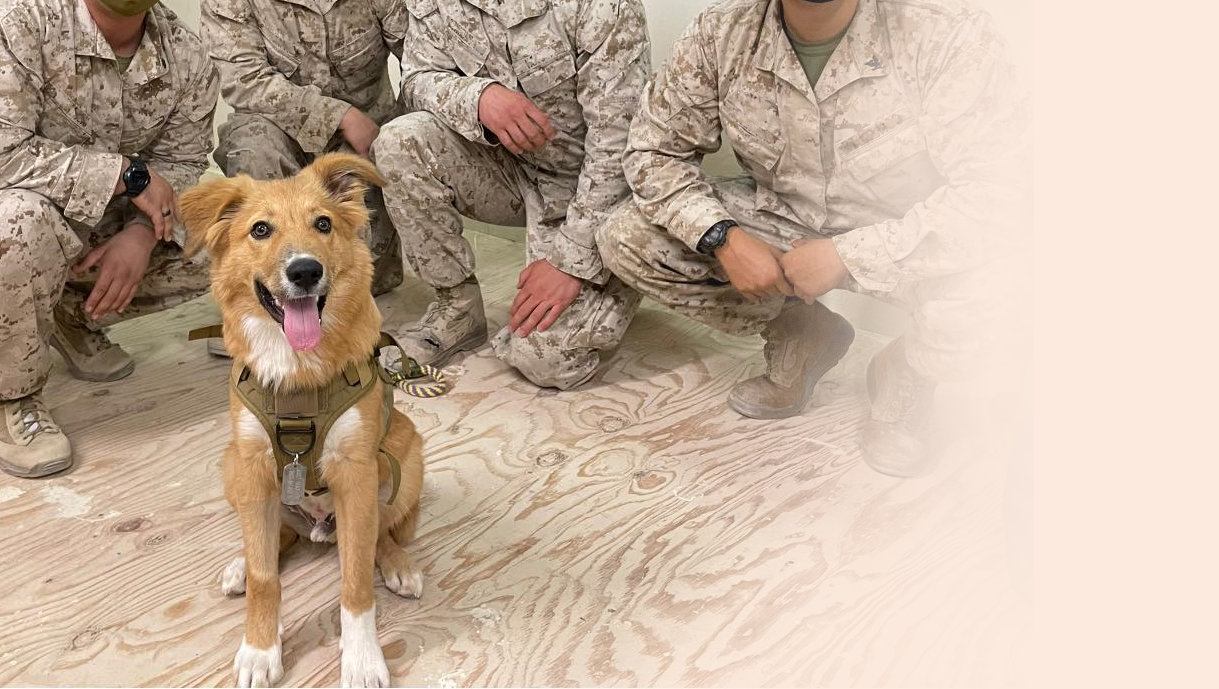 Musket was there for our soldiers, let's be there for him!

Please help us reunite this special team of Musket & Captain H, so they can continue to provide their healing powers to troops and people here in the states.

Musket is a brave and loving street dog who was formally adopted from a pound as part of an innovative program to help U.S. troops stationed overseas. His inspirational journey saw him rise through the ranks and into the hearts and minds of soldiers when he became the first recognized Behavioral Health Service Canine on the Middle Eastern base. But when Musket faced the grim prospect of euthanasia, Paws of War jumped into action to make sure that didn’t happen.

“This is a special case about an exceptional dog who has played an important role in helping our soldiers while they were deployed overseas,” explains Robert Misseri, co-founder of Paws of War. “To see him stripped of everything he worked so hard to accomplish does not sit well.”

Musket’s story began when a Behavioral Health Service Canine program was brought to life for our troops serving in the Middle East by a Brigade Surgeon Colonel and his team. Tasked with finding the right dog for the program, Behavioral Health Officer, Captain H’s search led her to the pound. She noticed a little pup eagerly trying to get her attention as he peered through the bars of his cage, his tail wagging as fast as it could go. He was adorable, and he was perfect!

The training to make it into the program was hard, but Musket was a natural, and he took on the role as though he knew it was his life’s purpose. CPT. H had a new prescription for whatever troubles a soldier was facing: Go pet Musket. The devoted pup thrived among his military family and they loved and appreciated him for giving them a break from the monotony of deployment, and reminding them of their own pets back home. Though new and short-lived, the program was a huge success.

When the program was unexpectedly terminated, the order came through that Musket’s status had been revoked, and with it, the devastating news that he was being stripped of his DoD identification. Despite everything he had done, Musket was once again considered to be a stray dog, and in line with military policy he had to leave the base immediately. There was nowhere for him to go but back to the pound and his life hung in the balance.

Desperate to save Musket, CPT H reached out to Paws of War and action began immediately to start the process of getting Musket to safety. He was flown to a foster caretaker in Canada where he completed the CDC required 6-month quarantine to be able to enter the United States. Now he is ready for this final part of his journey - reuniting with CPT H and moving into his Stateside forever home.

“We are only able to help our military members and the animals they love thanks to everyone who supports our mission,” said Misseri. “Musket is invaluable to those in need and we cannot let his therapeutic service come to an end. He thrives in helping and strives to do his best - he has more than earned a safe place. We are doing everything we can to make that possible for him here in America”

Paws of War is committed to continuing Musket’s training, and will provide him with veterinary care so he and CPT H can continue to bring Musket’s healing personality to the people who need him here in the U.S. To support the efforts to help Musket continue his work and reunite with his soldier,

With deepest gratitude,
From all of us at Paws of War

Paws of War
"Helping both ends of the leash"

With your help we can reunite Musket with his soldier,
and provide support as they continue to make a difference in the lives of others.

Thank you for your kind support!